INK TO SPILL PRESENTS A POIGNANT EXAMINATION OF OUR WORLD THROUGH AN ECLECTIC, ALTERNATIVE ROCK SOUND WITH THE INFLUENCES OF  SOUL, R&B, AND FUNK.  THE GROUP LEAVES NO STONE UNTURNED, WITH LYRICS THAT RANGE FROM THE DEEPLY PERSONAL, TO THE SOCIALLY CONSCIOUS, TO THE DOWNRIGHT RIDICULOUS. 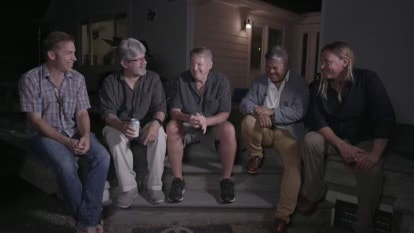 Above: Gus Reeves-Voc & Gtr, Bob Palmieri-Gtr, Bob Sauer-Lyr, Ernie Adams-Drs and Ryan Behling-Voc, Bs and Pn
Below: The song "Chapter 12" is inspired by a most creative story telling book chapter about a young, autistic boy obsessed with the length and placement of pauses in rock songs.
Above: In the Studio with "Ink To Spill" performing "Stop, Drop and Roll" with Gus Reeves on vocals and guitar, Ryan Behling on vocals and bass guitar and myself on drums
Above: Live in Virginia from left to right is myself, Gus Reeves and Ryan Behling, with special guest guitarist Bob Palmieri performing the song "Raging Hormones"
Above: Gus Reeves singing an Ink To Spill original composition "Lenny"
Above: Where Went José?, a song about a young boy who discovers his classmate
and best friend Jose’, the son of Dreamers, has been captured by ICE and shipped
back to the country his parents left decades ago as children themselves.
Above: Gus Reeves singing "Something Here is Torn"
Above: "Blooming in New Orleans"